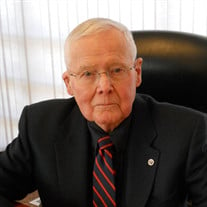 Fred Richmond Parry, 88, of Phoenixville, Pennsylvania, passed away on January 30, 2021 after a long life of hard work and dedication to his family, country, and community. He was born in Pittsburgh, Pennsylvania on September 16, 1932 to the late Ronald and Lemabel Parry. He was preceded in death by his wife of 56 years, Lilli “Lil” B. Parker. He loved spending time with his family, especially at Christmas and in the summer at lakes in Montrose, Pennsylvania and Lake Gaston, Virginia. He is survived by his daughters, Lyn Gibson of La Plata, Maryland and Mary Beth Arnold of Franklinton, North Carolina; his grandchildren, Meredith Arnold of Clayton, North Carolina and Laura Boyle, of Virginia Beach, Virginia; and three great grandchildren, Jackson, Bryce, and Lily Boyle. After graduating high school in Canandaigua, New York, he began his studies in religion and ministry at Trinity College before enlisting in the U.S. Marine Corps in 1952. He retired with the rank of Captain, USMC in 1974 after 22 years of faithful service including two tours of service in Vietnam. He continued his association with his USMC brothers in the ‘2nd Radio Battalion Association’ to the end. He returned to his beloved Pennsylvania in 1974 and worked in various management positions with KD Tools, Bowen McLaughlin, Campbell Chain, Brownstown Computer, and Hamilton Technology. In 2005, he retired as director of purchasing for the Lower Merion School District. He then operated Parry’s Project Management until finally retiring in 2013. Long active in serving his community, he was elected a Lions Club District Governor, an elected member of the Phoenixville Area School District Board, a member of the Phoenixville Library Board of Trustees, and an elected member of the Schuylkill Township Board of Supervisors. He was very proud of his Phoenixville Area School District Wall of Fame Award in 2013 and Outstanding Citizen of Schuylkill Township award in 2018. A memorial service will be held in Phoenixville, PA at a later date. He will be interred with his late wife, Lil, in the columbarium at the Arlington National Cemetery at a later date. Raymond Funeral Home of La Plata, Maryland is handling the arrangements. THE PARRY FAMILY HAS ASKED THE PUBLIC TO NOT SEND FLOWERS. THANK YOU.

Fred Richmond Parry, 88, of Phoenixville, Pennsylvania, passed away on January 30, 2021 after a long life of hard work and dedication to his family, country, and community. He was born in Pittsburgh, Pennsylvania on September 16, 1932 to the... View Obituary & Service Information

The family of Fred Richmond Parry created this Life Tributes page to make it easy to share your memories.

Send flowers to the Parry family.