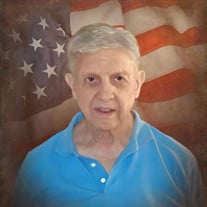 Fergus A. “Scotty” Howie, 89, of La Plata, Maryland, died on September 14, 2021, at his residence. Fergus was born on April 2, 1932, in Edinburgh, Scotland to the late Mary Catherine Rae and William D. Howie. Fergus proudly served in the United States Air Force. He attended the First Presbyterian Church of Smyrna, Delaware. He and his wife were owners of a deli called, The Gourmet in Tucson, AZ and he was a manager with Hertz and National car rentals in Newark, NJ. When his sons were younger, he enjoyed coaching their football and baseball teams. Fergus was an avid New York Yankees and Giants fan. He was a devoted husband, father, grandfather, and great-grandfather who enjoyed his life to the fullest. Fergus was survived by his loving wife of 68 years, Ella Grace (Eickmeyer) Howie, children; Sheryl Walls and her husband Ennis, Sue Green, Scott Howie, and Stephen Howie and his wife Jennifer, nine grandchildren, and nine great-grandchildren. Family and friends will be received on Tuesday, September 21, 2021 from 10AM until time of service at 11AM at Applebee-McPhillips Funeral Home, 130 Highland Ave, Middletown, NY 10940. Interment will follow at Wallkill Cemetery, 160 Midway Road, Middletown, NY 10940.

The family of Fergus A. "Scotty" Howie created this Life Tributes page to make it easy to share your memories.

Send flowers to the Howie family.