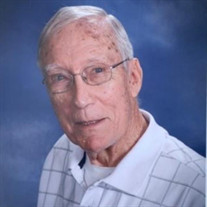 Eugene Joseph Kirscht, 86, passed to the arms of Our Lord on Monday, February 28, 2022, at University of Maryland Charles Regional Medical Center in La Plata, MD. He was born May 10, 1935, in Albertville, MN, to the late John George and Agnes (Thulen) Kirscht. He grew up in Albertville, MN, and was the second youngest of six siblings. He graduated from the Stout State College in Menomonie, WI, in 1959 where he earned a degree in Graphic Arts. He served in the U.S Army in the 264th Field Artillery Battalion working on a 280mm gun from 1954-1956 in Germany. He worked as a personnel specialist for the Veterans Administration in several hospitals to include Tomah, WI; Milwaukee WI; Iron Mountain, MI; Bronx, NY; Boston, MA; Huntington, WV; Philadelphia, PA; and VA Central Office, Washington, DC. He had 30+ years of federal civil service. Eugene was a loving and devoted husband, father, grandfather, and great-grandfather. His hobbies included woodworking, reading the newspaper, yard work, fishing, hunting, traveling, watching football (rooting for the Minnesota Vikings), and feeding the wild animals. He was a Third Degree Knight in the Knights of Columbus, Archbishop Neale Council, No. 2279, La Plata MD. He was a people person, and loved sharing his life experiences with others, and helping encourage them to follow their career aspirations. He was a friend to everyone, and always sought to bring out the best in others. He also enjoyed praying the daily rosary with others and charitable giving. Eugene is survived by his daughter, Rose Marie Quicker (Dennis) of Auburndale, FL (formerly Potomac, MD); his sons: John Brian Kirscht Sr. (Cathy) of La Plata, MD; Edward Joseph Kirscht (Jennifer) of Abell, MD; and Eugene Joseph Kirscht, Jr. (Nora) of La Plata, MD; his grandchildren: Kevin Quicker, Cynthia Mancinelli, Krista Quicker, John Brian (J.B.) Kirscht Jr, Bradley Kirscht, Lauren Kirscht, and Cameron Kirscht; his great grandchildren: Cecilia & Luna Mancinelli and Easton & Baylor Kirscht; his brother: Edward Jerome Kirscht of Plymouth, MN. In addition to his parents, he was preceded in death by his wife Yvonne Anne MacDonald of Pittsburgh, PA, whom he married on February 20, 1971, at St. Stephen Church, Framingham, MA. As a widower with three small children, he was introduced to Yvonne by a good friend and colleague, Ellie Morey. He was preceded in death by his wife Helen Marie Lauer of Deadwood, SD, whom he married on September 3, 1960, at St. Ambrose Church, Deadwood, SD. Eugene was also preceded in death by his sister Mary Jane and brothers Louis George, Bennet Francis, and Roger William all of Minnesota. A Mass of Christian Burial will be held at 10 am on Thursday, March 24, 2022 at Sacred Heart Catholic Church, La Plata, MD, followed by a celebration of life in the Friendship Hall. Visitation with the family will occur before the service. Interment will be conducted at Maryland Veterans Cemetery, 11301 Crain Highway, Cheltenham, MD, 20623 on April 12, 2022 at 1 pm. In lieu of flowers, memorial contributions may be made to Sacred Heart Catholic Church, 201 St. Mary's Avenue, La Plata, MD, 20646. Condolences can be made to the family on Eugene's Tribute Wall. Please visit the website for more information, updates, and details.

Eugene Joseph Kirscht, 86, passed to the arms of Our Lord on Monday, February 28, 2022, at University of Maryland Charles Regional Medical Center in La Plata, MD. He was born May 10, 1935, in Albertville, MN, to the late John George and Agnes... View Obituary & Service Information

The family of Eugene Joseph Kirscht created this Life Tributes page to make it easy to share your memories.

Eugene Joseph Kirscht, 86, passed to the arms of Our Lord on...

Send flowers to the Kirscht family.