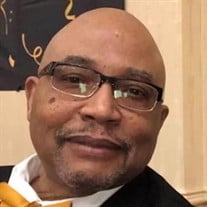 From humble beginnings in a small Georgia town to traveling the world in service of his country, Eugene David Champion was a decorated military veteran, devoted father and family man. Born on May 8, 1956 in Siloam, GA to Willie James Champion and Bride Mae Greene, he was the youngest of three children (Brother- James Albert Champion Sr., Sister- Catherine Champion). His mother moved with all of the children to Cleveland, OH in 1957 where Eugene would spend his childhood. A 1975 graduate of Glenville High School, he attended Ohio University for a semester before deciding to enlist in the United States Air Force. Eugene served overseas in Germany and Spain during his military career. He even served in support of Operation Desert Storm & Desert Shield from 1990 to 1996. He was honored with several awards and decorations during his service. Eugene would eventually retire from the service in 1996 as a Master Sergeant. Always one to pay attention to detail and a master at deciphering information, Eugene spent his years since retirement working mostly in the defense sector including as a Documentation Supervisor, Chief of Administration and as a Sections Chief at the Defense Nuclear Agency. He was currently working for the Department of the Air Force in a position he had held for more than 16 years. Known to many family and friends as "Champ" or "Dubbie," Eugene loved to hunt, play golf and ride his motorcycle with his brothers from his motorcycle club, the Low N Wide Rydaz. He loved to laugh, had a wicked sense of humor and was a lover of films and music. Eugene went to glory on Friday, January 28, 2022 and is survived by his two sons, Donald Eugene Champion (39) and David Ryan Carey-Champion (31), step-children Ashlea Warren-Seibles and Jonathan Carey. He's also survived by his significant other Cheryl Williams, Denise Cunningham (mother of Donald), Martha Carey (mother of David), loving nieces and nephews and his beloved sister-in-law, Annie Beatrice Champion. He was preceded in death by his parents and siblings and we can just hear the laughs and love coming from them as they all catch up. Eugene's ashes will be buried at Quantico National Cemetery, a national cemetery for veterans who served in the United States Armed Forces, on Friday March 4, 2022. In lieu of flowers, the family of Eugene Champion asks that you consider donating to #covidknowmore, the NAACP's effort to spread COVID awareness. They also have useful information to help navigate this pandemic and resources for ordering free tests and masks. You can donate and get more information at: www.naacp.org/campaigns/covid-know-more

From humble beginnings in a small Georgia town to traveling the world in service of his country, Eugene David Champion was a decorated military veteran, devoted father and family man. Born on May 8, 1956 in Siloam, GA to Willie James Champion... View Obituary & Service Information

The family of Eugene David Champion created this Life Tributes page to make it easy to share your memories.

From humble beginnings in a small Georgia town to traveling the...

Send flowers to the Champion family.