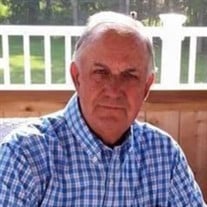 Ernest Courtland Freeman Jr., of Bradenton, Florida, passed away at his home on January 25, 2021 surrounded by his loving family. Born on July 16, 1937 in Skygusty, West Virginia, “Ernie” was the son of the late Ernest C. Freeman Sr. and Maggie B. Freeman. Ernie served in the U. S. Air Force from 1955 to 1959 and received his formal education in Engineering from the Columbia Technical School of Northern Virginia. He later would work for the U.S. Federal Government in Washington, D.C. for over 30 years and ended his career at the Department of Energy serving as an Engineering Program Manager. Ernie loved spending time with his family and many friends, and enjoyed the outdoors, especially going back to the family cabin in the West Virginia mountains, camping, boating, motorcycle riding and hunting. He was a founding member of the Southern Maryland Hunt Club; a member and officer of the Izaak Walton League of Hughesville and a member of the Waldorf Elks Lodge. After retirement, Ernie became an avid golfer and spent time in Maryland, North Carolina and Florida. Ernie was fortunate to have traveled the world with his loving wife Mary Jane, making many new memories and friends on each adventure. In addition to his parents, Ernie was preceded in death by two brothers, Curtis Freeman and Johnnie Freeman and three sisters, Cledia Day, Betty Garay and Pearl O’Dell. He is survived by his wife, Mary Jane Freeman; daughters Kimberly Ransom (David), Terry Orlandi (Dan), Laurie Freeman (Cindy), and Kelly Guy (Mike); seven grandchildren Cammie Quigley (Chris), Colin Ransom, Julie Johnson (Josh), Dylan Ransom (Nicole), Elisa Lewis (Clayton), Courtlyn Guy and Kendall Guy; one sister Kitty Moxley and one brother Eugene Freeman as well as numerous nieces and nephews. A visitation will be held on Saturday, February 6, 2021 at 9:30am, followed by a Mass of Christian Burial at 11:00am at Holy Ghost Catholic Church, Newburg, Maryland. Due to Covid restrictions, attendance is by invitation only; masks are required and social distancing will be in place. Interment to follow Mass in the church cemetery. In lieu of flowers, memorial contributions may be made to the Ladies of Charity, Holy Ghost Catholic Church, 15848 Rock Point Road, Newburg, Maryland 20664 or Tidewell Hospice Group of Ellenton, Florida Tidewellfoundation.org/donate.

Ernest Courtland Freeman Jr., of Bradenton, Florida, passed away at his home on January 25, 2021 surrounded by his loving family. Born on July 16, 1937 in Skygusty, West Virginia, &#8220;Ernie&#8221; was the son of the late Ernest C. Freeman... View Obituary & Service Information

The family of Ernest Courtland Freeman Jr. created this Life Tributes page to make it easy to share your memories.

Send flowers to the Freeman family.