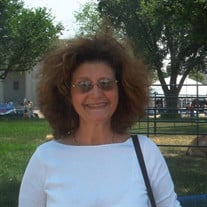 A loving and caring wife, devoted mother and a dedicated friend. She is survived by her husband of 35 years, Eugene Kuhn and her son John Adams. Known to her friends as Effie, she was born Efstathia to Irene and Nicholas Barlas in Athens, Greece and sister to John Barlas. She graduated high school in Piraeus, Greece and met her first husband, Brian Adams, and Air Force veteran assigned to Hellenikon Air Base just outside of Athens. They married in 1976 and later were assigned to Edwards AFB in California where her only child, John was born in 1978. Later, they moved to RAF Lakenheath in England and then to Warner Robins, Georgia. They separated in 1983 and she returned to Athens with John. She met her second husband, Gene, in July 1984 in the seaside town of Glyfada, Greece. From the beginning, they were inseparable and married in Glyfada on February 15, 1986. As a military wife, she left Greece in 1990 with the closing of Hellenikon Air Base and accompanied Gene to Sembach Air Base in Germany in 1990. A year later with the Cold War ended, Sembach was closed. They returned to the United States in 1991 to Offutt Air Force Base near Omaha, Nebraska for the next 6 years. While there, Effie attended college and completed all the classroom requirements for a registered nursing degree. She was unable to complete the clinical requirements due to Gene being sent to Korea in 1996 with a reassignment following to Langley Air Force Base in Hampton, Virginia. She did, however, train and worked for a short while as a certified nursing assistant in Nebraska. They lived in Virginia for 5 years until Effie and Gene retired from the Air Force. They settled into civilian life in Waldorf where they have lived for the last 20 years. During this time, she became a United States citizen in Baltimore in 2003. She was employed in various businesses in Charles County, but stopped working 14 years ago when health issues made it too difficult to continue. She was immensely proud of being a military spouse doing her part to serve this country. She was happiest when she could help others and enjoyed doing volunteer work when possible. And she was an intensely loving mother and wife to the very end. Her passing was sudden and unexpected. She is survived by her husband of 35 years and her son John Adams. A Gathering will take place on Saturday, May 8, 2021 from 11:00AM until time of Memorial Service at 12:00PM at Raymond Funeral Chapel, 5635 Washington Avenue, La Plata, MD 20646.

A loving and caring wife, devoted mother and a dedicated friend. She is survived by her husband of 35 years, Eugene Kuhn and her son John Adams. Known to her friends as Effie, she was born Efstathia to Irene and Nicholas Barlas in Athens, Greece... View Obituary & Service Information

The family of Efstathia Kuhn created this Life Tributes page to make it easy to share your memories.

A loving and caring wife, devoted mother and a dedicated friend....

Send flowers to the Kuhn family.