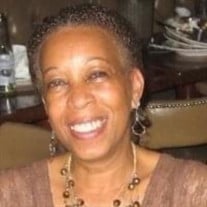 Doris (Eloise) Dodson blessed the lives of the late James and Evelyn Hilton on July 22, 1952. In a family of six children, she was the only daughter. Eloise was raised in Mount Victoria, MD and she graduated from LaPlata High School. She met John Dodson and they were joined in holy matrimony in 1972. This year marks 50 years of marriage for the devoted couple. Eloise had a successful career as an Executive Producer for Voice of America (VOA), the largest and oldest U.S. funded international broadcaster. She loved her job and met numerous lifelong friends who she cherished and created many memories with outside of their job. She retired from VOA in 2008, after 38 years of service, to care for her parents. However, it wasn’t all work and no play for Eloise. Over the years she loved to go on vacations to beautiful destinations, hand dance until the wee-hours, cook delicious meals and host family gatherings. She also enjoyed fishing, gardening, bingo, decorating and working on home improvement projects with her husband. Eloise became a pivotal mother figure for many. Much like her late mother, Eloise’s home always had an open-door policy and she welcomed everyone with open arms. On Sunday March 27, 2022, Eloise transitioned peacefully in her Upper Marlboro home surrounded by loved ones. She leaves to cherish her memory her loving husband, John Dodson; her devoted daughter, Linda Hilton Rogers (Russell, Jr.); two beautiful grandchildren, Rya Rogers and Russell (Trey) Rogers III; five loyal brothers, James Hilton (Melissa), Charles Hilton, Dwight Hilton (Judy), Stanley Hilton (Cheryl) and Thomas Hilton (Bonnie); one brother-in-law, Gregory Dodson (Tuesday); three sisters-in-laws, Joyce Cobey (William), Janice Brooks, and Audrey Feggins (Robert); two god-children, Kevin Hilton and Tamia Hilton; a host of special nieces and nephews, including Jewel McFadden who she cared for like a daughter; three best-friends, Ethel Butler, Julie Gresham and Ndimyake Mwakalyelye (Demi) and an abundance of relatives and close friends. Eloise will be remembered most for her kind heart and feisty personality. The many lives she touched is a testament on how to lead with love. She is greatly missed but will never be forgotten by the many who were lucky enough to know her.

Doris (Eloise) Dodson blessed the lives of the late James and Evelyn Hilton on July 22, 1952. In a family of six children, she was the only daughter. Eloise was raised in Mount Victoria, MD and she graduated from LaPlata High School. She met... View Obituary & Service Information

The family of Doris Eloise Dodson created this Life Tributes page to make it easy to share your memories.

Doris (Eloise) Dodson blessed the lives of the late James and...

Send flowers to the Dodson family.