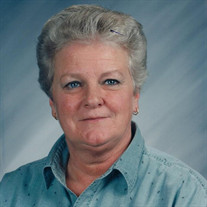 Diane Marie Johnson, 78 of Colton’s Point, Maryland passed away on May 7, 2021 in Washington, DC. Diane was born in Takoma Park, Maryland to James and Ada Lowe on March 9, 1943. She went to school in Bethesda, Maryland where she attended Walter Johnson High School. She married her loving and devoted husband, Franklin T. Johnson, on February 20, 1987 in Rockville, Maryland. She worked as a Cafeteria Manager at Seven Locks Elementary for Montgomery County Public Schools where she served nourishment and smiles to all who attended and worked there. After her career with MCPS, she retired and moved to St. Mary’s County where she lived with her husband on the edge of the Potomac River. Diane is preceded in death by her mother, Ada Lowe; father, James Lowe; son, Keith Edward Mazzi; and brother, James Lowe. Diane is survived by her husband, Franklin T Johnson; daughters, Deborah Lynn Mazzi-Vaughn and Amy Marie Earp; as well as her beautiful grandchildren who meant the world to her, Kara Lynn VanEmmerick, Rachael Mazzi-Vaughn, Oceanna Pyles and Kaitlyn Mays. The family of Diane wishes to extend our sincere thanks to Medstar St Mary’s, Medstar Washington Hospital Center, Hospice of St Mary’s County, and all who have been holding us all up in prayer. The family is planning a private Celebration of Life. All flowers are to be delivered to 20505 Waterloo Lane, Colton’s Point, Maryland 20626. Memorial donations in Diane’s name may be sent to the American Cancer Society. Arrangements are by Raymond Funeral Service PA in La Plata, Maryland.

Diane Marie Johnson, 78 of Colton&#8217;s Point, Maryland passed away on May 7, 2021 in Washington, DC. Diane was born in Takoma Park, Maryland to James and Ada Lowe on March 9, 1943. She went to school in Bethesda, Maryland where she attended... View Obituary & Service Information

The family of Diane Marie Johnson created this Life Tributes page to make it easy to share your memories.

Send flowers to the Johnson family.