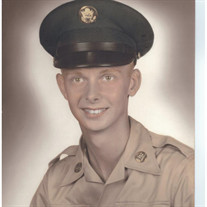 David Terance “Terry” Norris (born June 21, 1947) died in his home on October 24, 2020. Terry was the son of Stephen N. Norris, Sr. and Margaret A. Jenkins Norris. He lived on Cobb Island, Maryland all his life, except for his military service in the Army from August 1966 – July 1968. He crabbed, fished, and oystered in the rivers in the Cobb Island area. He also enjoyed creative woodworking, carpentry, and gardening. He was quite proud of his eight-foot tomato plants and his hydroponic gardening. Terry is survived by his three brothers, Stephen Norris, Jr. (Jeannie), James Norris (Margaret), and John Norris and his two sisters, Nancy Giacolone and Gloria Burley (Patrick). He had a special relationship with his God Daughter, Kristen Shahmir, who was the “apple of his eye.” He is also survived by many nieces, nephews, great nieces and nephews, and some great-great nieces and nephews. Visitation on Friday, October 30, 2020 from 10AM until Mass of Christian Burial at 11AM at Holy Ghost Issue Catholic Church, 15848 Rock Point Road, Newburg, Maryland 20664. Interment to follow in the church cemetery. Face masks are required for all services and social distancing is to be observed with limited attendance.

The family of David Terance "Terry" Norris created this Life Tributes page to make it easy to share your memories.

Send flowers to the Norris family.