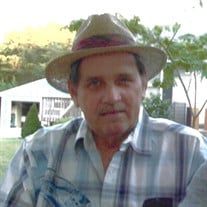 David Ronald DeMarr Sr., 75, of White Plains, Maryland, passed away peacefully on Tuesday, December 21, 2021 at his home with his family by his side. He had fought a very long battle with C.O.P.D. Born on October 12, 1946 in La Plata, David was the son of the late John Charles DeMarr and Blanche Estelle DeMarr. David was a carpenter by trade and a master craftsman to his family. He was very skilled, designing and building most anything. David was a loving husband, father, and grandfather who loved having his family around. He was a selfless man, always thinking of others. He will be greatly missed by his family and friends. In addition to his parents, David was preceded in death by his brothers PFC John C. DeMarr Jr. and Nicky DeMarr; sister Judy Hammonds; one grandson. David is survived by his loving wife of 56 years, Cathy DeMarr; son David DeMarr, Jr. (Joyce); daughters Kathy Niner (Ricky), Mary Cave (Gary), and Jennifer Conn (Scott); eight grandchildren; eight great grandchildren; sisters Janice Hall and Robin Shannon (Don); brother-in-law Darrel Hammonds; brothers Rocky, Richard (Laura), and Philip (Kim); many nieces and nephews. A visitation will be held on Monday, December 27, 2021 from 5PM to 8PM with Prayers at 7PM at the Raymond Funeral Service, P.A., 5635 Washington Avenue, La Plata, Maryland 20646. Mass of Christian Burial will be offered at 11AM on Tuesday, December 28, 2021 at Our Lady Help of Christians Catholic Church, 100 Village Street, Waldorf, Maryland. Interment to follow the Mass at Trinity Memorial Gardens, 3221 Mattawoman-Beantown Road, Waldorf, Maryland 20601. Memorial contributions may be made in David’s name to Hospice of Charles County, 2505 Davis Road, Waldorf, Maryland 20601. Condolences may be made on David’s Tribute Wall.

David Ronald DeMarr Sr., 75, of White Plains, Maryland, passed away peacefully on Tuesday, December 21, 2021 at his home with his family by his side. He had fought a very long battle with C.O.P.D. Born on October 12, 1946 in La Plata, David... View Obituary & Service Information

The family of David Ronald DeMarr Sr. created this Life Tributes page to make it easy to share your memories.

Send flowers to the DeMarr family.