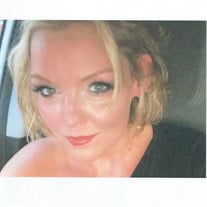 Dana Michelle McGowan - Pendlum, 45, Died suddenly and unexpectedly February 18, 2021. Dana graced the world with her light on September 9th 1975 at what is now United Medical Center in Washington DC. After 72 hours of labor, Dana, ever the handful, finally, slowly emerged. She was a shy sweet child beloved by all, who grew into a beautiful, independent woman. Dana went to college, and after pursued an incredibly successful advertising career for both the New Jersey Star Ledger, and the Washington Post. Dana was a beautiful, kind, and gentle soul. She was a mother, a daughter, a sister, a niece, and a friend. She was defined by an outpouring of empathy for all living things, especially dogs. Always helping anyone in need, no matter her own expense. At 45 she leaves this world far too young than could ever seem fair, and with it she leaves behind a million broken hearts. Dana is survived by her Mother and Grandmother, Joann McGowan and Joan Watkins; Daughter, Chelsea McGowan; Sister and brother in-law, Kellie and Charles Secrist; Brother, Steven D McGowan, Jr.; and Grandchildren, Liam, Jaxon, and Mia Dana was welcomed at Heavens Gates by; Father, Steven D. McGowan; Aunts, Gail, Judith, and Patricia McGowan; Aunt, Linda Sullivan; Uncle, David McGowan; and Grandmother, Mary Esther McGowan Please keep Dana in your hearts as I know she would keep you in hers. Pray that she found a swift and loving home in heaven where she deserves to be. Be with GOD Dana, we love you and we wait in anticipation of the day we can again look upon your smiling face. Due to Covid regulations there will be a limited capacity visitation on Saturday, March 6, 2021 from 12:30 PM until time of service at 1:30 PM, at Raymond Funeral Service, 5635 Washington Avenue, La Plata, MD 20646.

Dana Michelle McGowan - Pendlum, 45, Died suddenly and unexpectedly February 18, 2021. Dana graced the world with her light on September 9th 1975 at what is now United Medical Center in Washington DC. After 72 hours of labor, Dana, ever the... View Obituary & Service Information

The family of Dana Michelle McGowan-Pendlum created this Life Tributes page to make it easy to share your memories.

Send flowers to the McGowan-Pendlum family.