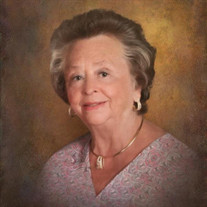 Cora Garrison Deihl, 86, Beloved Wife, Mother, and “Mimi” Cora Garrison Deihl, 86, passed away ever so peacefully and with grace on Thursday, November 25, 2021 at Washington Hospital Center. She was born October 14, 1935 in Hayesville, N.C., the daughter of Grady and Lois Garrison. Cora, affectionately known as “Mimi” by her granddaughters, their school friends, and her great grandson, was a loving wife, mother, grandmother, great-grandmother, and friend. She left a lasting impression on anyone who met and knew her. Cora was somewhat of a Renaissance Woman. She was raised on a farm in North Carolina during an era where you grew the food you ate, and you sewed the clothes that you wore. Her seamstress skills came in handy in later years as she made her own evening gowns, clothes for her son and daughter, and even Barbie and Baby Doll clothing! She looked forward to summer each year when she would peruse local farmer’s markets for the freshest produce for her weekly meals. She loved nothing better than a fresh tomato sandwich with mayonnaise on white bread. She was the model of southern hospitality which was evident each time she opened her home to others for celebrations (cocktail parties, baby showers, birthday parties, and crab feasts). She was a most gracious hostess who loved spending time with family and friends, cooking and sharing with all the dinners she had prepared. An invitation to the Deihl’s Annual Christmas Dinner Party was coveted each year as everyone looked forward to the menu as much as the decorations, especially her Dicken’s Village display that took up an entire room! Cora was married to her husband, Cecil for 63 years. They met on a blind date and were married on June 28, 1958 in Hampton, Virginia. They relocated to Maryland where she worked with her husband as he established his two companies, Deihl Enterprises and National Floral Supply of Maryland. The latter allowed Cora the opportunity the “see the world” as she and her husband traveled abroad as members of The World Flower Council. Some of her favorite memories from their travels included an Ostrich farm in Australia, Vatican City, the spice markets in Turkey, an in-home dinner with a family in Russia, the snowcapped alps in Switzerland, The Eiffel Tower in France, Tulip fields in Holland, and the Kruger Park Safari in South Africa. She was an avid Redskin fan during the George Allen and Joe Gibbs tenures. She and her husband were fortunate to attend several Super Bowl Championship games during those years. Cora’s blessings were many, but she counted her children, granddaughters, and great-grandson as her greatest ones. Her first grandchild, Courtney, was born on Cora’s birthday which established a truly loving bond that existed throughout her lifetime. Cora realized early on that her heart was exponentially large and shared that love with her second grandchild, Kaitlyn. Cora was extremely proud of “her girls”, and all their accomplishments. She was their biggest fan and supporter, attending school field trips, dance competitions, golf tournaments, and football games at East Carolina University. Mimi’s boy, her great-grandson Titus, was born in 2018. Although the distance between them was great and the visits limited due to the Covid pandemic, Cora thoroughly cherished her time with him; whether in-person or on Facetime chats. Cora’s passing was unexpected and left a hole in the hearts of many. But it is our fervent belief and with assured faith that she has been reunited with her son, Ricky, in heaven. She was preceded in death by her parents Grady and Lois Garrison, her sister Winna Fae Napier, and her son Richard Ellis Deihl. She is survived by her husband Howard C. of Swan Point, MD., her daughter Kathleen Burke (Paul) of Swan Point, MD., her grandchildren, Courtney Terrell (Terrence) of Dallas, TX., Kaitlyn Simmons (Lance) of Centennial, CO., her great-grandson, Titus Jett Terrell of Dallas, TX., and her precious pups, Benji and Margo. Invitations to a celebration of life luncheon to be held at Swan Point Yacht and Country Club after the first of the year are forthcoming. The family would like to thank the team of doctors (Satler and Lee) and nurses (Lauren, Sabrina, Jean, and Holly) that provided care and comfort to Cora in the cardiac ICU unit (2 NE) at Washington Hospital Center.

The family of Cora Garrison Deihl created this Life Tributes page to make it easy to share your memories.

Send flowers to the Deihl family.