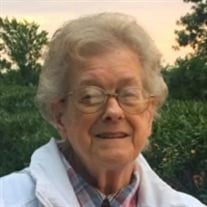 Chrystal Starr Beauregard of La Plata, MD passed away April 25, 2021 at the age of 80. Born in Springfield, MA, Chrystal met her future husband Albert (Al) Beauregard at Westover Air Force Base in MA during the summer of 1959. They were married on January 16, 1960 and most recently celebrated their 61st wedding anniversary. Chrystal enjoyed the many Air Force Bases that they were stationed at during Al’s 30-year military career. When Al retired in 1986, they moved from Andrews AFB to Waldorf, MD where they lived for 33 years. In August 2019 they moved to La Plata, MD. During their tour of duty in Hawaii (her favorite assignment), Chrystal enjoyed being in the Lady’s Sodality Club where she made life-long friendships. She also enjoyed volunteering with the Family Services at Dover AFB and Lackland AFB (TX). She was actively involved as a lector at their church, no matter which base or state they were in. She loved baking and is well known for all the novelty cakes she made for many years and many occasions. She also baked cakes for all occasions for their church including First Communion, Confirmation, raffles (popular Turkey cake), as well as baked cakes for the monthly birthday celebration at Charlotte Hall Veterans Home. She is fondly known by all of her children, grandchildren and many of their friends for her Saturday morning pancakes, especially the chocolate chip ones. All of her grandchildren were trained to put out their finger to get a taste of her homemade cake frosting. She is survived by her husband Al, their daughters Lori Loriso (Mark), Sheri Beauregard James (Mike), Vicki Caspar (Mike), Tracy Hash (Randy), and Jody Catterton Logue. Grandchildren: Robert Albert & Brett Starr Beauregard, Rachel & Christopher (Allison) Caspar, Alexander, Gabriel & Kaitlyn Catterton, Amber, Taylor & Scotty Logue, Matthew Hash and Daniella Gray (Will). Great Grandchildren: Kylie & Robert Beauregard Jr., Cayden, Ella, Olan, Christopher, Emilea, Mackenzie & Madeline, sister Priscilla Martin of MA, brother-in-law Edward Beauregard (Barbara) of FL, and many nieces, nephews, and cousins. She is predeceased by daughter Christy Lynne Simon, grandson Ryan Caspar, mother Edith Bratcher, siblings Shirlee (Bratcher) Anastasio Youngblood, Howard Bratcher, Chloe (Bratcher) Hitch, Adrian “Sonny” Bratcher, and Wayne Willetz, niece Phyllis Cerullo, nephews William, Robert & James Martin, great nephew Joshua Bee, son-in-law Scott Logue, and many more beloved relatives. Relatives and friends are respectfully invited to attend visiting hours on Tuesday, May 4, 2021 from 3–5 pm at Raymond Funeral Service, 5635 Washington Ave, La Plata, MD 20646. On Wednesday, May 5, 2021, viewing from 10–11 am followed immediately by a funeral mass at Our Lady Help of Christians Church, 100 Village Street, Waldorf, MD 20602. Mass will be livestreamed at https://www.youtube.com/channel/UClWY76uLWdNOu4bRn8XPmUw Interment will be held at 1 pm at Cheltenham Veterans Cemetery. Memorial contributions may be made to the Kidney Foundation or a charity of one’s own choice.

Chrystal Starr Beauregard of La Plata, MD passed away April 25, 2021 at the age of 80. Born in Springfield, MA, Chrystal met her future husband Albert (Al) Beauregard at Westover Air Force Base in MA during the summer of 1959. They were married... View Obituary & Service Information

The family of Chrystal Starr Beauregard created this Life Tributes page to make it easy to share your memories.

Send flowers to the Beauregard family.