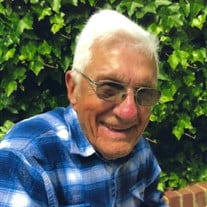 Chester Vernon Bright September 13, 1925 – October 2, 2021 Chet Bright, age 96, of Cobb Island, Maryland, passed away peacefully at his daughter’s home in La Plata, Maryland on Saturday, October 2, 2021. He was born in Robert Lee, Texas on September 13, 1925, to the late Charles Bright and the late Winnie Dunn Bright. In addition to his parents, Chet was predeceased by his wife, Hazel Hicks Bright; his sons, Richard Bright, David Bright, and Kenneth Bright; his daughter, Terri Abramo; his sister, Elgene Whittaker; his brothers Charles Bright and Jimmy Bright; and his grandson, Jason Corby. Chet is survived by his daughters, Andie Corby (Jim) and Sandie Turner; his grandchildren Brent Corby (Lauren), Tommy Turner (Missy), Erin Bettner (Jon), Derek Turner (Beth), and Keeley Abramo (Heath Nichols). He is also survived by his great grandchildren Tyler Bettner, Caitlin Corby, Hazel Bettner, Ruby Turner, Bennett Corby, Luke Turner, Liam Nichols, and Ashton Nichols. Chet left home at the age of 17 to join the U.S. Navy. He served 20 years in the Navy including service during World War II and the Korean War. He was a civilian employee with the National Oceanographic Office for 10 years and was sent in Viet Nam during that time. Chet was an early frog man, Navy Seal, and Under Water Demolition Team member. He was proud to be a Navy veteran. He built a 36’ sailboat in his backyard; and upon retirement, he and his wife, Hazel, sailed the boat down the Inland Waterway to the Florida Keys and lived on the boat during construction of their home. He enjoyed sailing the Caribbean and visiting many of the islands. Chet wrote a book with his grandson, Derek Turner, entitled “Bluejacket, A Sailor’s Life.” He definitely lived life to the fullest. Services will be held at Raymond Funeral Home on Monday, October 11th with visitation at 12:30 p.m. followed by the funeral service at 1:30 p.m. Interment will follow at Trinity Memorial Gardens. Officiants will be the Rev. Kate Heichler and Pastor Tim Bean. In lieu of flowers, donations may be made to Hospice of the Chesapeake for Charles County, 2505 Davis Road, Waldorf, MD 20603 or the National Navy Seal Museum, 3300 N Highway A1A, Fort Pierce, FL 34949.

The family of Chester "Chet" Vernon Bright created this Life Tributes page to make it easy to share your memories.

Send flowers to the Bright family.