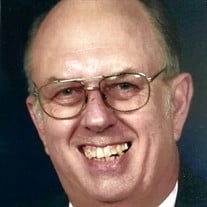 Charles James (Charlie) Gauthier, 82, a long-time resident of Bryans Road, Maryland passed away unexpectedly on Thursday, September 2, 2021. Charlie was born in New Orleans, Louisiana on October 11, 1938, son of Maurice Gauthier and Alice Atherton Gauthier. He attended school at St. Alysious High School in New Orleans, Louisiana followed by obtaining a degree in Mechanical Engineering from the University of Southwestern Louisiana (now ULL) in Lafayette, Louisiana in 1961. It was there where he met the love of his life and best friend, Carmen Rose Bernard. The couple were married on November 25, 1961 in Mansura, Louisiana and shortly thereafter moved to Maryland where they have lived for the past nearly 60 years. Charlie was a devoted husband and dedicated father with three children who admired him, looked to him for all guidance, learned from his work ethic, and always knew he was there to support and guide them. Charlie had a successful career as an Engineer for the Indian Head Naval Surface Warfare Center in Indian Head, Maryland for 33 years until his retirement in 1994. He was a member of the Knights of Columbus and an active member of St. Mary Star of the Sea Catholic Church where he served as a Eucharistic Minister and active member of the Food Pantry Ministry. Charlie loved helping those less fortunate than himself and was so generous with his time and energy. During his younger years, he served as a Cub Scout and Boy Scout leader for many years. Charlie is survived by his loving wife and best friend of nearly 60 years, Carmen Rose Bernard Gauthier; his children, Connie Gauthier Rosenberger (Tom), Charles Robert Gauthier (Debbie), and Christopher Gauthier (Rachel); his grandchildren, Allison Gauthier Shirt and Simone Gauthier, Thomas and Daniel Rosenberger, and Chloe and Connor Gauthier; his great grandson, John Charles (Jack) Shirt; and his siblings, Agnes Gauthier Mautner, Patricia Gauthier Ashton, and Suzanne Gauthier LeBaron. He is preceded in death by his parents, Maurice and Alice Gauthier, and his sister, Mary Gauthier Miller. Pallbearers are Robert Gauthier, Christopher Gauthier, Tom Rosenberger, Thomas Rosenberger, Daniel Rosenberger, and Michael Chiasson. Honorary Pallbearers are Kenneth Songy and Patrick Bernard. Visitation will be held on Thursday, September 16, 2021 from 10:00 to 11:00 a.m., followed by a Mass of Christian Burial at 11:00 a.m. at St. Mary Star of the Sea Catholic Church, 30 Mattingly Avenue, Indian Head, Maryland with Pastor Brian Coelho officiating. Burial will follow at Saint Charles Cemetery, 4970 Strauss Avenue, Indian Head, Maryland. PLEASE NOTE: Per the local Archdiocese guidelines, face masks are required in all indoor church and church-related activities. In lieu of flowers, the family is requesting that memorial donations be made in Charlie's honor to St. Mary Star of the Sea Catholic Church - Food Pantry Ministry, a cause he was very devoted to and passionate about. Donations can be mailed to St. Mary Star of the Sea, 30 Mattingly Avenue, Indian Head, Maryland 20640 or can also be made online at staroftheseaindianhead.org/donations (indicate "Pantry").

The family of Charles James Gauthier created this Life Tributes page to make it easy to share your memories.

Send flowers to the Gauthier family.