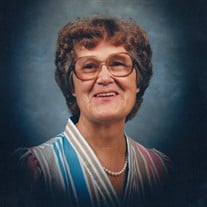 Cecile M. Stotesbury, 96, of La Plata, MD, passed away peacefully at her home on Tuesday, October 13, 2020. She was born and raised in Hamilton, New Zealand, the youngest of four daughters born to the late Cecil M. Muir and Muriel B. (Ross) Muir. She met her future husband, Joe, while he was on R and R in New Zealand during World War II. After the war, she came to the United States to marry and begin her new life in the DC/Maryland area. She earned a teaching certificate from the Auckland College of Teachers and, later, a Bachelor of Arts and a Bachelor of Science degrees from the University of Maryland. She was an elementary school teacher in the Prince George’s County School System for over 25 years. After her retirement, she enjoyed active membership for many years with the Mattawoman Creek Art Center, in Marbury, Maryland, and the North End Gallery in Leonardtown, Maryland. She also enjoyed participating in various activities with friends at the Clark Senior Center in La Plata, Maryland. In addition to her parents, Mrs. Stotesbury was preceded in death by her husband of 71 years, Joseph R. Stotesbury; son David Paul (who died in infancy); sisters Joan Leggatt, Beth Reynolds, and Rae Andrews. She is survived by her daughter, Jennifer; son, Brian (Diane); five grandchildren and two great grandchildren; many nieces and nephews. The family would like to express their deep appreciation and gratitude for those family and friends who expressed much love and caring during Cecile’s life. A special thanks goes out to Philip Wisotsky, M.D., Hospice of the Chesapeake (Charles County Hospice) and to the Visiting Angels staff (particularly Arnell Edlen) for their care and support. Interment will be at Maryland Veterans Cemetery in Cheltenham, Maryland. Due to her wishes and the COVID19 Pandemic, no services will be held at this time. Please leave a memory or condolence on Cecile's Tribute Wall.

Cecile M. Stotesbury, 96, of La Plata, MD, passed away peacefully at her home on Tuesday, October 13, 2020. She was born and raised in Hamilton, New Zealand, the youngest of four daughters born to the late Cecil M. Muir and Muriel B. (Ross)... View Obituary & Service Information

The family of Cecile M. Stotesbury created this Life Tributes page to make it easy to share your memories.

Send flowers to the Stotesbury family.