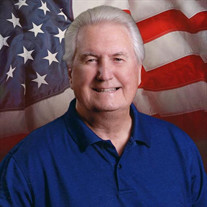 Buddy Eugene Plante, 84, of Waldorf, MD, died on October 14th, 2021, at the Charles County Hospice House. Buddy was born on December 27th, 1936, in Grantsville, West Virginia to the late Ruth (Bush) and Roy P. Plant. In addition to his parents, he is preceded in death by his brother Dale Plant, and sisters Betty Barkman and Greta L. Langford. He is survived by his loving wife of 61 years, Marilyn L. (Iser) Plante, daughter, Brenda (Plante) Bowie and her husband Jerry, grandson Ryan and his husband Donald Groves and Samantha and her fiance Shazia Khan. He was a graduate of Steubenville “Big Red” High School, and a life-long fan of the Ohio State Buckeyes and an avid Washington Football Team fan. Buddy proudly served in the United States Air Force and ended his career as a Senior Master Sergeant while in the 113th Tactical Fighter Wing in the D.C. Air National Guard as a supply technician at Andrews Air Force Base. Buddy retired from NSWC in Indian Head after serving 30 years in the federal government. He was a Deacon at Potomac Heights Baptist Church where he also served in the bus ministry and the Royal Ambassadors. In his later years, he was a Deacon at Marbury Baptist Church. He enjoyed music and dancing. He had happy feet. Buddy, loving husband, father, and grandfather, will be greatly missed by all who knew him. Family and friends will be received on Saturday, October 16, 2021, from 10:00 AM until the Memorial Service time at 12:00 PM at Raymond Funeral Service, 5635 Washington Avenue, La Plata, MD 20646.. In lieu of flowers, memorial contributions can be made in Buddy’s name to: Hospice of Charles County, 2505 David Road, Waldorf, MD 20603, St. Jude Children’s Research Hospital, 501 St. Jude Place, Memphis, TN 38105 or Marbury Baptist Church 4670 Bicknell Road, Marbury, MD 20658.

The family of Buddy Eugene Plante created this Life Tributes page to make it easy to share your memories.

Send flowers to the Plante family.