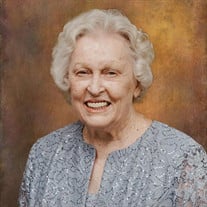 Barbara Louise Trease, 83, of LaPlata, Maryland, passed away peacefully of natural causes in her home on Thursday, December 9, 2021. She was born on November 11, 1938, in Washington D.C. to the late Edwin Minor Foster and Louise Elizabeth Foster. Barbara, affectionately known as “Bobbi” to her family, had a large, loving extended family that stretched from Washington, D.C. to King George, Virginia. Barbara graduated from Oxon Hill High School in Oxon Hill, Maryland. After graduation she worked as a secretary at Andrews Air Force base where she met the man who would be by her side for the next 40 years, John David Trease; they were married on March 1, 1958. With John David in the United States Air Force, the couple moved to Bolling Air Force Base in Washington, D.C. and began their lives together. During their time in the Air Force, they were stationed overseas in England and Germany before being transferred to Rome, NY, and eventually back to Maryland. John David and Barbara were blessed with two daughters, Sharon Deanne, born January 13, 1959, and Diane Louise, born January 16, 1961. Barbara became a full-time homemaker and mother until the girls were in high school, when she began working as a teaching assistant in Prince George’s County Public Schools; she retired 20 years later. She enjoyed the role of helping her fellow teachers and her gift of kindness and patience was evident. During this time, Barbara formed strong friendships with her fellow coworkers that she maintained throughout the rest of her life. Barbara’s daughters, Sharon and Diane, were her pride and joy for 30 years as she watched and nurtured them into adulthood. Her love for her daughters was only equaled when she was later blessed with five grandchildren: Kristina Boelcskevy, Taylor Henderson, Alexander Boelcskevy, Grant Henderson, and Lauren Henderson. Barbara loved her family dearly. She looked forward to having family gatherings at her home and gathering around the table to share family meals. She also loved the adventure of having her grandchildren over for “Nanny Camp” as well as going on vacations with her daughters and their families. She had a sign in her kitchen that summed her feelings up perfectly: Family Is Everything. Barbara had many interests. She was an active member of the New Life Church, participated in the local chapter of Antique Art, and loved both hosting and playing in the neighborhood Bunko group. She loved her neighbors, and they became part of her extended family. Barbara is survived by her two children, Sharon and Diane, her son-in-law (Mark Henderson), and her five grandchildren: Kristina, Taylor, Alexander, Grant and Lauren. She was predeceased by her husband (John David) and son-in-law (Gaspar Boelcskevy).

Barbara Louise Trease, 83, of LaPlata, Maryland, passed away peacefully of natural causes in her home on Thursday, December 9, 2021. She was born on November 11, 1938, in Washington D.C. to the late Edwin Minor Foster and Louise Elizabeth Foster. Barbara,... View Obituary & Service Information

The family of Barbara Louise Trease created this Life Tributes page to make it easy to share your memories.

Send flowers to the Trease family.