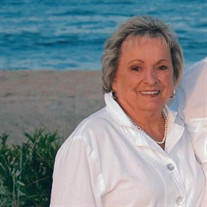 Barbara Lee (Wright) Simpson died at her home in La Plata, MD on Sunday October 18, 2020 of non Covid related natural causes surrounded by her loving family. Barbara was born on June 3, 1931 in Washington, DC to the late William J. Wright and Amelia L. Wright. She was also predeceased by brothers William J. Wright Jr and Robert E. Wright. She is survived by her husband of 69 years Senator James C. Simpson, sons James C. III (Ross) Washington, DC, Gary M. (Molly) Port Tobacco, MD, and daughter Carol Mullen (Mike) Fenwick Island, DE as well as 7 grandchildren and 2 great grandchildren. Barbara was raised in the Petworth neighborhood in Washington, DC and attended Roosevelt High School. In 1951 she married her high school sweetheart, Jim. After Jim’s discharge from the US Marine Corps, together they established Simpson Distributing Co. in 1954, distributing Pabst Blue Ribbon Beer in Prince Georges County. After they acquired the rights to Carling Black Label in Southern Maryland, the business was relocated to Waldorf in 1958 representing multiple brands in Charles, St. Mary’s, Calvert and Prince George’s Counties for 32 years. Barbara was co-owner and active in the daily operation of the business for its entire length of operation. The business was sold in 1986 and she and Jim retired, spending their time between La Plata, MD and Ft Myers, FL. In 1970, Jim was elected County Commissioner and then in 1974 to the Maryland State Senate. It was often said that Barbara was her husband’s most valuable asset on the campaigns and being related to most everyone in western Charles County certainly helped. Ever with a positive attitude, Barbara always put her family and friends before herself. A loving and devoted Mother, Grandmother and Great-grandmother she was also exceptional cook and an amazing athlete and golfer. Barbara was active in the Charles County community as a member of many civic organizations as well as the board of Civista Hospital now the University of Maryland Charles Regional Medical Center in La Plata, MD. In 2008 Barbara and Jim were asked to chair a committee for Civista Hospital charged with raising $5 million dollars ultimately exceeding that goal. The entire Simpson family would like to give thanks and appreciation to Diane Burroughs, Jackie Fowler, Deanna Jones, Demetria Neal, Chrissy Newman, Meagan West and Mandy Manypenny-Dudley of Care with Grace. Their care and attention went beyond the pale and helped us greatly through this difficult time. Funeral mass will be Tuesday October 27, 2020 at 10 am at Sacred Heart Church 201 St. Mary’s Ave, La Plata, MD. Interment private at Mt. Carmel Monastery. Services will also be streamed live at www.facebook.com/sacredheartlaplata In accordance with current pandemic protocols face coverings are mandatory and social spacing is to be observed with limited attendance. In lieu of flowers, donations may be made to Mt. Carmel Monastery, 5678 Mount Carmel Road, La Plata MD 20646, Marbury Baptist Church, 4670 Bicknell Road, Marbury, MD 20658 or Charles Regional Medical Center Foundation, PO Box 1701 La Plata, MD 20646 www.crmcfoundation.org.

The family of Barbara Lee Simpson created this Life Tributes page to make it easy to share your memories.