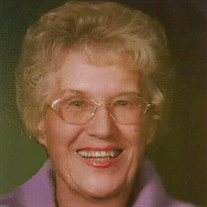 Ann M. Gillespie was born on June 3, 1929 in Cincinnati, Ohio and she passed away peacefully on December 5, 2020 at 6PM surrounded by her loving family. She was 91 wonderful years old and still mentally sharp right up to the time of her stroke.... View Obituary & Service Information

The family of Ann Martha Gillespie created this Life Tributes page to make it easy to share your memories.

Send flowers to the Gillespie family.