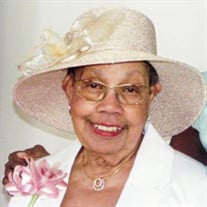 Anita Maxine Ross age 87, was born on November 29, 1933 in Leavenworth, Kansas to the late Maxine Williams and Carroll B Williams Sr. She spent the first 5 years of her life in Leavenworth with her mother and siblings while her father found work as a pharmacist to prepare to move the family to Chicago for a better life. Anita was the 4th of 5 children and graduated from Marshall High School in Chicago, Illinois. After receiving her high school diploma, Anita and her sister worked at Williams Prescription Laboratory, the family owned business in Chicago where she helped to deliver compounded prescriptions to the patient’s homes. She wasn’t satisfied in just working in the family business, so she tried her luck in applying to Illinois Bell Telephone Company. In those days, the telephone company was not hiring blacks. The night before the interview, Anita prayed and said God’s will be done. When she arrived for the interview, she was given a test and aced it with a score of 98 percent. Anita was hired on the spot making her the first black telephone operator in Chicago. While working at the telephone company she initially attended Herzl Junior College and 2 years later she transferred to Roosevelt University where she received her BA in Education in 1954. In the latter part of 1954 Anita met the love of her life Ernest Franklin Ross Jr. of Whitesboro, New Jersey at the Central Presbyterian Church of Chicago. After a year and half long-distance courtship, they married on September 9, 1956 in Chicago. After the month-long honeymoon was over, Anita moved with her husband to Whitesboro, New Jersey where they raised 5 wonderful children and God blessed them with 51 years of marital bliss. Anita was a pillar to her community where she played an active role in the education of her children by participating in PTA where she held several offices from Treasurer up to a two-term office of the President. She also was a charter member of the G.E.M.S. (Gracious Enthusiastic Matrons of Service) of Cape May County NJ. Through fund raisers this community organization was successful in awarding scholarships to at least 200 qualified minority students for 15 years of their existence. Anita also was an active member of The Red Hat Society, Inc. where she became a lifetime member and we cannot forget her role of a Rotary Ann of The Mid Jersey Cape Rotary Club. Anita was a member for 50 years at the First Presbyterian Church of Wildwood NJ where she successfully raised and instilled the Word of God into her children. During her 50 years as a member of the church she held the offices of, an Ordained Deacon, Trustee, Clerk of Session for the Presbytery, and her final position of membership to the Elder Board for the Pastor until she relocated to Maryland in 2006. In 2009, Anita joined her daughter’s church Greater Saint John Baptist Church now known as Greater Saint John Cathedral. She was an active member in the Senior R Us Ministry, Pray Praise and Study (PPS), and enjoyed attending church functions. Anita was a world traveler, traveling as far west to the Hawaiian Islands, far east to Europe, far south to South America and far north to Canada. Her paradise with the love of her life was the Hawaiian Island Kauai. She also loved her road trips traveling all over the United States with her daughters and grandchildren. She was known to her family as “Anita GO Ross”. It was nothing for her and her daughters to get on a bus to New York to see a Broadway Show, oh how she loved the theatre. Anita was also an advent reader where she could read 600 pages in a day. She kept busy with Search and Crossword Puzzles, monthly Woman’s World, and we can’t forget the daily newspaper. Anita will be remembered for her quiet tenderness, humility, compassion, love for life and her infectious smile that would light up a room. Preceding her death, the love of her life Ernest Franklin Ross Jr, brother Joseph Duncan Williams, sisters Margaret Estelle Clark and Elva Theora Williams, children Maxine Estelle Stewart, and Father Ernest Franklin Ross III. She leaves to cherish and celebrate her life her oldest brother Dr. Carroll B Williams Jr., three daughters, Pearline Carroll Ross, Juanita Jane Ross, and Tanya Denise Menefee, beloved daughter in law, Gladys Lee Ross, her 5 grandchildren, Ernest F Ross IV (Kathleen), Rachel and Joseph Cheeseborough, Hope Pearl Ross, and Thomas J Ross, 7 great grandchildren, her lifetime friends Jeanette B Richardson and Florence Pothin, devoted Nephew Eric R Clark Sr, beloved nieces, Dr. Sheila A Jefferson and Pearl T Fletcher, all of her nieces and nephews, her beloved Jones Family and a vast number of extended family and friends and last but not least her devoted Samoyed Pryce Sebastian.

Anita Maxine Ross age 87, was born on November 29, 1933 in Leavenworth, Kansas to the late Maxine Williams and Carroll B Williams Sr. She spent the first 5 years of her life in Leavenworth with her mother and siblings while her father found... View Obituary & Service Information

The family of Anita Maxine Ross created this Life Tributes page to make it easy to share your memories.

Send flowers to the Ross family.