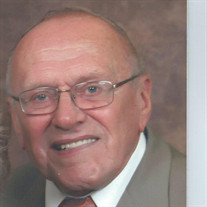 Andrew Joseph Rickert, 84, of Mechanicsville, Maryland, passed away on Tuesday, April 6, 2021 at MedStar St. Mary’s Hospital in Leonardtown. Born on December 29, 1936 in Jacksonville, Illinois, he was the son of the late Andrew M. Rickert and Pearl Marie Rickert. Mr. Rickert graduated from SS Peter and Paul High School in Waterloo, IL. He then served in the U. S. Marine Corps from 1954 until his Honorable Discharge in 1957. Mr. Rickert worked and retired from the U. S. Army Materiel Command as a Logistician. He served on the Board of Trustees of the Charles County Nursing Home from 1986 to 1989 and was Chairman from 1988 to 1989. He is a member of the American Legion Post 298 in Hughesville, the Elks Club in Waldorf. Mr. Rickert was also a member of the National Active and Retired Federal Employees (NARFE) Chapter 969. His hobbies included gardening, fishing, and going to baseball games. He's an author of two published books, "Tomorrow" and "A Marine From Renault." In addition to his parents, Mr. Rickert was preceded in death by his sisters Nettie Roosa and Edna Jenkins. He is survived by his wife Bessie Rickert; daughters Kathy Miller (Tim) of Mechanicsville, MD, Patty Gajda (Mark) of Milford DE, Cindy Rickert, and Angie Hubenschmidt (Mike) of Waldorf, MD; grandchildren Kenneth, Crystal, Michele, Michael, Justin, Samantha, Amanda, Jamie, and Aaron; eleven great grandchildren; sister Mary Melliere of Prairie Du Rocher, IL. A visitation will be held on Tuesday, April 13, 2021 from 2PM until 5PM at the Raymond Funeral Service, P.A., 5635 Washington Avenue, La Plata, Maryland 20646. Mass will be offered at 10AM Wednesday, April 14, 2021 at St. Peter’s Catholic Church, 3320 St. Peter’s Church Road, Waldorf, Maryland 20601. Per COVID-19 guidelines, masks are required and social distancing is still in place. All visitors should be mindful of others. Interment to follow in the church cemetery. Memorial contributions may be made to American Cancer Society, P. O. Box 22718, Oklahoma City, OK 73123-1718. Condolences may be made on Mr. Rickert’s Tribute Wall.

Andrew Joseph Rickert, 84, of Mechanicsville, Maryland, passed away on Tuesday, April 6, 2021 at MedStar St. Mary&#8217;s Hospital in Leonardtown. Born on December 29, 1936 in Jacksonville, Illinois, he was the son of the late Andrew M. Rickert... View Obituary & Service Information

The family of Andrew Joseph Rickert created this Life Tributes page to make it easy to share your memories.

Send flowers to the Rickert family.