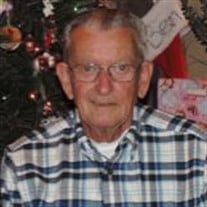 Alan Gregory Cecil Sr., 79, of Waldorf, Maryland passed away peacefully on July 20, 2021 at the UMD Charles Regional Medical Center in La Plata, Maryland. Born October 25, 1941 in Washington, DC, he was the son of the late Lawrence Woodrow Cecil Sr. and Theresa Cecilia McConnell Cecil. He was a 1959 graduate of Suitland High School. He was a proud veteran of the United States Navy. Retired from the Naval Research Laboratory where he worked as a Sheet Metal Mechanic for 27 years. Following his retirement, he worked for Eagle Systems and Suburban Propane. He was a lifetime member of the Waldorf Moose Lodge and Hughesville American Legion. He enjoyed gardening, puzzles, coin collecting, watching football and spending time with his family and friends. In addition to his parents, Al was preceded in death by his brothers Lawrence Cecil Jr. and Edward Cecil. He is survived by his wife of 58 years, Geraldine Cecil; daughter Lori Hill (Donald) of Bryantown; son Alan Cecil Jr. (Liz) of Mechanicsville; grandchildren Gregory, Benjamin, Ajay and Leah; great grandchildren Payton, Lylah, Kade and Orion; many other extended family members and friends. A visitation will be held on Wednesday, July 28, 2021 from 5PM to 8PM with Moose Service at 7PM at the Raymond Funeral Service, P.A., 5635 Washington Avenue, La Plata, Maryland 20646 where Funeral Services will be held on Thursday, July 29, 2021 at 11AM following the 10AM to 11AM visitation. Interment to follow at Resurrection Cemetery in Clinton. Pallbearers are Gregory Cecil, Benjamin Cecil, Ajay Hill, Leah Hill, James Cecil, Michael Cecil and Brian Payne. Memorial contributions in Al’s name may be made to Alzheimer’s Foundation of America, 322 8th Avenue, 16th Floor, New York, NY 10001 or online at www.alzfdn.org.

The family of Alan Gregory Cecil Sr. created this Life Tributes page to make it easy to share your memories.

Send flowers to the Cecil family.